skip to main | skip to sidebar

Play, love, and work are the three innate drives that power human thought and action throughout the entire life cycle...

The person who loves his work (love) takes something from himself or herself (the play element) and something learned from the environment (the work element), and the result is something new that cannot be reduced either to the individual or to the environment.

Dr. David Elkind,  Developmental Pscychologist & author  of The Power of Play and The Hurried Child


Begun in 1994, the original goal of The Learning Arcade program was to create  unique, safe, affordable and choice-based  learning activity centers, during out of school time, using recycled and under-utilized  equipment.   Word and Math Rescue were the most popular games that functioned well on  computers that, at the time,  pre-dated any version of Windows.  Since there were usually more children interested in the  games than there were computers,  many stood behind  others to cheer them on (a few didn't even speak english)  or they engaged in  additional activities  available; depending on space and staffing.  The most popular choices included scarf juggling to music,  flying paper crafts (kites, doves) and a Power Stick craft, twirl and teach workshop.


Here are instructions to make the kites.

Until 2001, The Learning Arcade was a popular after school and summer enrichment choice for children in the Princeton/Trenton area.  Now that technology is at the fingertips of most children with an ipod or cell phone - The Learning Arcade continues to offer other empowering and cooperative play activities, including music,  with themes of nature, kindness, peace and civic awareness that are portable enough to fit on a table with a little space around it for kids to move around at  music festivals or activity fairs. 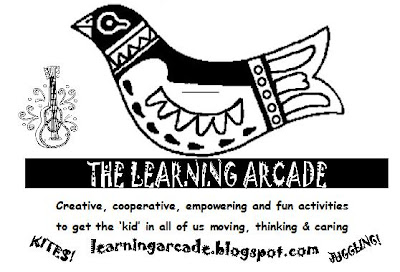 With an educational background in juvenile delinquency prevention that began in Trenton more than 30 years ago, I worked in a juvenile detention facility at the time and was disillusioned with a system that was and still is very broken.  While raising my own children, I was inspired to begin  The Learning Arcade project by a lecture on  redirecting aggressive play that recommended using empowering and multicultural play activities to build self-esteem and social skills that studies have shown are effective approaches to prevention.  The presenter, who worked with Howard Gardner as a graduate student at Harvard University  came together with me and  other educators to brainstorm ideas based on that theory to provide an educationally enriching, choice-based learning environment using computers and other activities tied together with educational themes.

Dr. David Elkind was  an  influence on my thinking after he delivered a  keynote address at a Youth Violence Prevention Conference in 1997 - sponsored by the Coalition for Peace Action at the time I chaired the Peace Education Committee that planned it.   I had an opportunity to talk with him at length about my discoveries and he thought that The Learning Arcade was beneficial  because it offered children the time, space and choice needed to learn and practice social skills that have proven to protect them from the kind of stress that can trigger harm to self or others.

This lifelong learning project evolved much further after I discovered and learned to manage my own self-esteem issues in the process of correcting a debilitating case of ADHD with Open Focus neuro-feedback therapy.   As a result of this transformative, interesting and empowering therapy --  I became a songwriter and   more proficient  guitarist so that I could express an experience that words alone could not describe.   I now offer music and plenty of empathy for children who struggle, as I have, with ADHD.


Listed below are Learning Arcade activities and proposals:

For more information contact Sue Albert at learningarcade@gmail.com
Posted by About Me